Apex Publication’s Do Not Quietly anthology of short stories is an emotional tour-de-force that will snatch you out of your seat and leave you cheering. 5/5 stars. Every story in this book is worth the read, but there are a handful that stood out or shook me to the core, and their review follows

Do Not Quietly opens with Brooke Bolander’s Kindle, the story of a little girl caught in a reincarnation cycle until she gets it right. The story that starts with a familiar match-girl, abused in the cold selling her matches. Frozen, she strikes a match, and pictures the flames devouring her abusers. It goes out. Another match and this time her lost matriarch whispers to her that the blood of warrior queens runs in her veins and she must take back what was taken from her. You know what happens next, she freezes there, on the ground, a dead girl with matches spent. In the next life she dreams of saving her friend, a dream version where the sulphur of the match factory hasn’t taken the girl’s teeth. There comes a few more cycles until she sets the flame to buildings, to factories, a palace, until she reclaims her own story. I held my breath for entire sections of this story, it absolutely blew me away with its simmering rage and stunning protagonist. 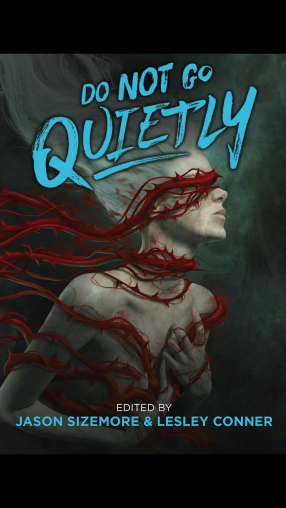 Rachael K. Jones’ Oil Under Her Tongue introduces us to Erin, a youth growing up in a strict Christian cult. It is modern day but her only future is that of wife and baby-maker. For now, she’s not yet 18 and working with Carlos in a gas station. He’s just bought a junker car for $50 and Erin’s spinning psalms into magic spells. They’re in this car when Hailey, an android imprinted on an owner who has died and left her heartbroken, finds them. As the pair try to help the android overcome her programming, a loosely veiled metaphor for Erin’s own programming, the relationship between Carlos and Erin deepens and the certainty that they need to fight for their future clarifies. This story punched me in the gut. Erin’s early life ran a little too similar to my own, making this both hard to read and a story I will always keep close to read again and again.

I’ve never reviewed a poem before and I’m not sure where to start, but I’ll say this: I wish every little girl could read If the Fairy Godmother Comes by Mary Soon Lee. I copied it out and hung it up where my daughters will see every day.

April Teeth, by Eugenia Traintafyllou, is another one that haunts you after reading. In the story’s world teeth are pulled and given to a goddess-like Tooth Fairy on faith they will regrow. The devout will lose their teeth naturally, while others will have to them pulled. It’s a story about how power pivots on acceptance and faith in that power,  and the “invisible thread that goes taut every time you overstep the boundaries… set for you.”

If this sounds interesting to you, I encourage you to check out the Kickstarter the same publisher has going on for their next anthology, containing many of the same authors, Invisible Threads. In some of the rewards,  you can support them simply by ordering copies of Do Not Quietly and Invisible Threads. You can also get story crits from some of the best in the biz (gasp!) which I happily admit I’m drooling over. If it funds, they’ll also be opening to submissions (cough cough pay attention writers). Check it out by clicking here and please consider helping them reach their goal before time runs out.

Stay safe everybody. Wash your hands.

One thought on “book review: Do Not Go Quietly”