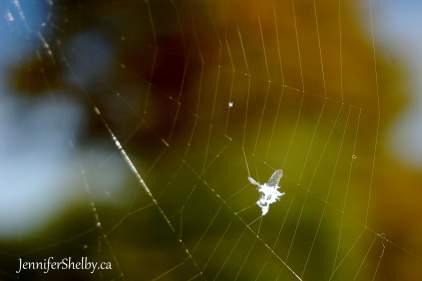 The fairy fluttered for a moment before giving up in disgust.

“No problem. Stay still, I’ll be right there.” The spider started picking his way to her.

“You won’t tell anyone, will you?”

“Not if you don’t want me to,” said the spider. He freed her wing from his sticky web with care.

She hung her head. “It’s so embarrassing.”

“Well, I don’t know about that. I’ve caught you three times this week, that’s less than last week by half! You’re doing well!”

Tangles sighed. “Thanks, Mr. Rupert, but we’re only half way through the week.”

Mr Rupert the spider looked around to see if anyone else was listening. “Between you and me, there isn’t a fairy alive that hasn’t been caught in a web at least once. We even get special training so we don’t eat you by mistake.”

2 thoughts on “a fairy caught, a fairy freed”