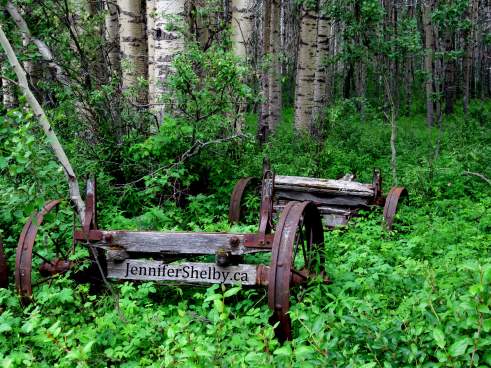 The fairies stole the wagon from the farmyard under the darkness of a moonless night. Perhaps they intended to return it in the morning, but as soon as they left they forgot where they found it in the first place.

The fairies hitched it to a dragon they hired for the occasion and went careening through the night. They tore down roads, cobblestone, paved, and dirt. When they grew bored of that, they gave the dragon full rein and she pulled them through the sky, scraping the wagon’s axles on the treetops, brushing past mountaintops, and narrowly missing the moon.

The old wagon had never had so much fun in all its life, and though it broke beyond all hope of repair, it didn’t much mind. When the sun rose upon their frolic, the fairies and the dragon abandoned the wagon in the forest and left for home. There the wagon sits still, telling wild tales of the crazy night it flew.