Hello and welcome to the May Day edition of the Insecure Writer’s Support Group (IWSG). On the first Wednesday of every month the IWSG meets to share their goals, insecurities, and writing challenges. If you’d like to join or lurk around to see what’s happening, you can link to the other members here.

This month’s optional question is “What was an early experience where you learned that writing had power?” For me it was reading Anne Frank’s The Diary of a Young Girl in grade school. I read this book four or five times between grade five and twelve. Here was a girl my age(s), who faced a tragic end in a concentration camp when the words ran out, mentioned only in the forward and the echo of the empty pages before I reached the back cover. When I read her words, I felt her essence flutter in the pages. This handful of stories written by an adolescent girl taught me more about empathy then I could have experienced in my privileged childhood. I spent hours staring at the ceiling, contemplating how many other Anne Franks died in those camps. She wasn’t just a character or a distant historical figure, she was my friend. That is a formidable power for a small book to have.

April’s been good to me. The Frye (literary) Festival is in full swing in my hometown of Moncton, NB, I became a fox-winning poet, had a short story accepted for Kaleidotrope in 2021, and I received my contributor copies of Unlocking the Magic. Check out this gorgeous cover: 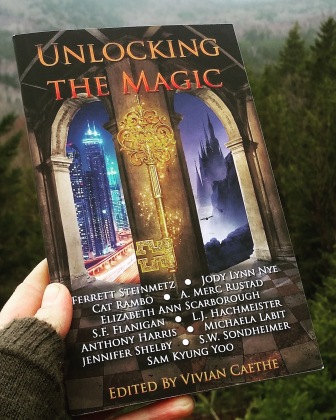 My favorite short story writer, A. Merc Rustad (now writing as Merc Fenn Wolfmoor), wrote the story directly before mine in the book, and that makes my imposter syndrome get up and start yelling louder than I’d like. But also… WHAT A THRILL OMG.

In a twist, my favorite novelist retweeted me a few days ago, which was… unexpected.

See, Neil Gaiman answered a tweet I had tagged him in a few months back, which had a turtling effect on me as an introvert. I put the masterclass away for a few weeks until it felt safe to go back. In writing this new tweet, I didn’t tag him, and so felt comfortable tweeting about how the class was inspiring me. Not shown in the above screenshot is the entire thread, where I finish up by calling Neil a modern-day muse which I meant but probably would never have written had I known he would read it (blush, blush). My inner introvert felt safe with no tags and no hashtags, guessing this tweet would get my usual two or three likes. It was up to 551 this morning. Happily, this time around it didn’t have the same turtling effect on me, though I do think if Mr. Gaiman’s going to keep using my tweets to sell his masterclass he should come over and have spaghetti with my family or something *wink*

I hope April was good to you as well, and I have my fingers crossed that May is going to be gangbusters for all of us insecure writers.

9 thoughts on “IWSG and the power of words”