Five years ago yesterday, we had a late spring blizzard. Wind howled, snow swirled, and cold reigned. I opened the front door to shovel off the collecting snow before it got too deep. My backdoor was already buried under a wall of drifting snow. When I opened the door, I glanced up and locked eyes with a cat taking shelter in our shed. It was white with gray splotches and it shivered in the cruel wind.

I  opened the door wider. “You’d better get inside,” I said and, as if he understood, he bounded across the snow and into the house.

My dog, Kira, and cat, Crookshanks, handled this situation admirably well. I think they knew. The new cat had frostbite on his ears and his nose but was otherwise healthy. He spent his first hour with us rubbing himself against my delighted then-toddler and me, purring happily.

There was no question of keeping him. He’d adopted us and that was that. We named him Blizzard and considered ourselves lucky. 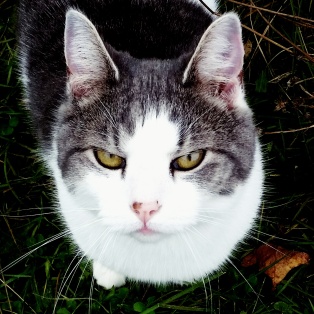 Rescued pets are devoted pets and Blizzard is no exception. He’s wonderful with the girls. They snuggle him and pull his tail more than I’d like, but he remains calm and loving. He plays with them.

He is silly. He likes to follow us around and bound up trees, couches, and across seas of toys. And sometimes, he pretends he’s a lobster. Or maybe he just likes to explore strange places which smell like fish.

Happy anniversary, Blizzard-the-Wizard. I don’t know what happened in your life to put you inside our shed that day, but I’m glad you found us.

3 thoughts on “five years of Blizzard”