We invited the Moon for dinner last week. To our delight, the Moon accepted our invitation and was courteous enough to shrink down for the event. I served a meal of mulled stardust and broiled comets from a recipe book I bought in a dream when I was seven.

The girls, of course, wanted pictures and the Moon obliged. I must say, I am happy with how they turned out. It’s nice to have memories of special guests the girls can look back on once they’re grown. 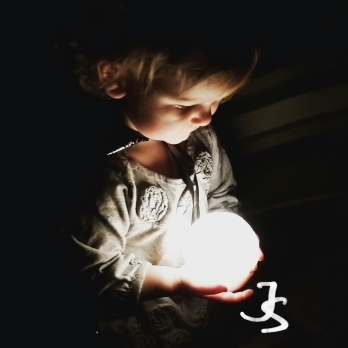 Little Nim, who rarely stays up late enough to enjoy the night sky, marveled at our guest and screamed when we tried to take them away. 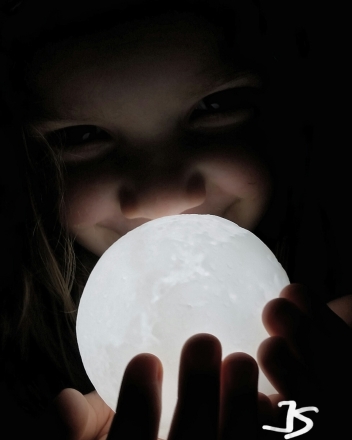 Evening, who can often be seen waving to the Moon and shouting “Hi, Moon!” every chance she gets, was especially joyful to see her friend up close.

Toys were pulled out and stories created. Evening insisted the Moon must have dragons, and the Moon did not disagree. Blizzard the cat wanted in on the fun and investigated Evening’s carefully staged dragon silhouette.

Shortly after taking this photo, Blizzard snapped up the dragon in his fuzzy jaws and ran off with him. Much hissing and fire-breathing ensued. I was embarrassed over the cat’s behavior but the Moon insisted it was the most excitement they’d had since the Pleiades passed through last month.

Blizzard returned with whiskers singed and bent. We haven’t found the dragon yet but we can hear him in the basement at night, breathing fire and munching stolen cat food.

Nim cried when it came time for the Moon to leave. Evening gave them a hug goodbye. I packed up the leftover comets and sent them along in case the Moon got hungry later. We stood on the porch and watched the Moon float up into the sky.

“Can we invite the Moon for dinner again, Mum?”

5 thoughts on “when the Moon came for dinner”