A moth fluttered against Levi’s bedroom window. He knew it was a Polyphemus moth because he’d seen it there the night before, drinking in the moonlight. It intrigued him enough that he looked it up in one of his great-aunt’s natural history books.

Old people had books like that, Levi noticed. All of his books were digital, but he liked the feel of pages turning, the sensation of hunting for information. His dad would have looked it up on some app if he was around. Great-aunt Eliza didn’t have a smart phone. She … no, they lived without them.

They’d called her on a landline to give her the news of his family’s demise, and she’d trundled out to get him in an ancient pickup truck more rust than metal.

Levi didn’t know his life anymore. He didn’t know his house, his bedroom, his school, or even his great-aunt. He wished he’d died with his family. His grief demanded it.

The moth fluttered again, a faint tapping of wings against the glass. Worried it might hurt itself, Levi opened the window. The moth flew in. 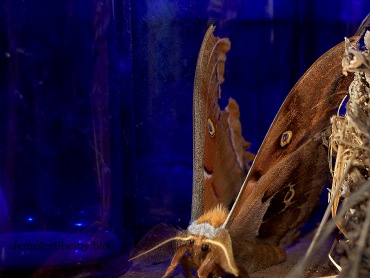 It settled on his desk, staring at Levi, or so he supposed. Its fuzzy, orange body loomed like a lion’s mane around the moth’s small face, from which erupted two long, feathered antennae. Tan wings stretched to ragged tips, slowly shifting up and down while owlish eyespots winked in the evening light.

“What are you doing here, Mr. Polyphemus?” Levi flicked on the desk lamp to get a better look at the moth. Light spilled off the desk onto the floor. Shadows fled into their corners, whimpering. Levi paid them little heed.

One shadow reached out across the floor from underneath the dresser. It slithered along the floorboards, defying the physics of shadows. The farthest tendril of this shadow almost touched Levi’s foot, but he sat down on the bed and drew his feet up at the last moment.

The Polyphemus moth shifted to face the shadow.

Levi leaned forward, catching a glimpse of the shadow reaching out from beneath the dresser. He froze. Something about that shadow set his spine alive with shivers and thickened his blood to slush.

Levi leaned back, willing his eyes away from the thing. He fixed them on the moth instead, which now stood perched, wings up and ready to fly, antennae waving. It stepped forward to the edge of the desk.

The shadow moved from beneath the dresser and oozed up the wall across from Levi. The light of the desk lamp had no effect upon this shadow. He watched with fascinated horror as it convulsed and shaped itself into his mother. She beckoned to Levi before morphing into his father and finally into his little sister.

He blanched in the light of the desk lamp as their resurrected ghosts writhed before him, cold, altered, and somehow not quite them.

The shadow turned into the car that shattered them to pieces and left Levi an orphan, living with his great-aunt and a landline and weird books about moths. It played out the scene before his eyes as his fists clenched at the quilt his great-aunt said she’d sewn by hand.

Levi caught his breath as the shadow took his own shape. The shape of a boy who wished he had died with his family. The shadow had come for him, he realized, come to grant his wish for death. Come to make him a shadow ghost like them.

For the first time, Levi felt afraid of dying.

He didn’t want his body burnt up in a crematorium while his great-aunt wept over him. He wanted to live, even if he had to live a different life than the one he’d expected, the one he’d planned. He had an aunt with a heart good enough to take him in and offer him what love she had to give. He could try this life. It might not be so bad.

“I want to live,” he said, his voice little more than a whisper.

The Polyphemus moth nodded once and leapt from the desk. Its wings fluttered fast enough to blur as it flew straight into the shadow of death.

The moth tangled the shadow in its tiny, barbed feet, drawing it further into the light. It began to shred the shadow, slow and methodical, between its feet. The shadow shriveled, writhing about the moth, but did little more than flick a bit of dust from the moth’s wings.

They twisted together in the air, the shadow growing smaller as the moth tore it into trifling fragments. The fragments wafted to the floor like ash and disappeared.

Levi watched with wonder as the moth finished up the last of the shadow and fell to the floor. The eyespots on its wings winked once and grew still.

Levi cupped the moth in his hands, unsure of why it saved him, why it came to help him, or how it knew.

For two days he left the Polyphemus moth atop his desk, hoping it would move or come to life again. He didn’t know how to check a moth’s pulse.

On the third day, Great-aunt Eliza gave him an old jar to preserve it in. She confessed to him she’d kept butterflies this way when she was young.

Levi placed the moth inside with care and screwed on the lid. He kept it by his bed, and never failed to say “Goodnight, Mr. Polyphemus,” before he shut the light and returned the room to shadows.